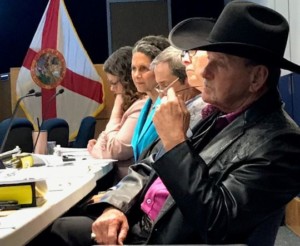 South Florida Water Management District board members including Jacqui Thurlow-Lippisch of Sewall’s Point, second from left in blue, and Ron Bergeron of western Broward County, in cowboy hat, listen to a presentation Wednesday, May 8, 2019, during a board workshop on water quality. (Photo: Treadway, Tyler)

And the newest board member led the charge during a workshop on the district’s role in cleaning the state’s water.

Increased nutrient pollution entering Lake Okeechobee “is coming from somewhere,” said Ronald “Alligator Ron” Bergeron, who is scheduled to be sworn in as a board member Thursday. “We’ve got to get a hold on where it’s coming from, and we need to monitor and regulate it before it enters state waters.”

Removing pollution, particularly the nitrogen and phosphorus from fertilizer that cause toxic algae blooms, from water at its source, Bergeron said, “is 20 times cheaper than building projects to clean it up later.”

Several board members had some serious questions about the state’s system of having farmers use best management practices, commonly known as BMPs, to reduce water pollution.

The most pointed questions came after Vanessa Bessey of the state’s agriculture department noted farmers aren’t required to prove their BMPs are cleaning water before it leaves their land.

“Don’t we have a monitoring tool to prove they’re getting the nutrient reduction they say they’re achieving?” asked board member Jay Steinle of Palm Beach County.

“If they implement the BMPs developed and recognized by the (Florida Department of Environmental Protection), there’s the presumption they’re meeting water quality standards,” Bessey replied. “It’s intuitive to us that if they put less fertilizer on their land, there will be less coming off their land.”

Board Vice Chairman Scott Wagner of Miami-Dade County was incredulous, saying the program was “based on theory” and self-regulation.

“One thing’s for sure,” Bergeron said, “whatever we’re doing today isn’t working.”

Bessey also noted her department asked the Legislature for $25 million to implement the BMP program and received $4 million, not enough for staff to make annual visits to all the farms in the BMP program.

In the past fiscal year, she said, department representatives visited about 3,600 of the 11,000 participating farms.

“We would love to have more money,” said Chris Pettit, who was announced Wednesday morning as head of the department’s agricultural water policy office.

“You need more data, more budget and more staff,” Gary Goforth, a Stuart environmental engineer and former SFWMD engineer, said during a public comment session. “A hole has been dug for you all” because of budget cuts imposed during former Gov. Rick Scott’s administration.

Serving 8.1 million residents and millions of visitors in 16 counties, the South Florida Water Management District does just what its name implies: control water. That means providing flood control when there’s too much water, drinking supplies when there’s not enough and restoring as much of the area’s natural water systems as having all those residents and visitors will allow. TYLER TREADWAY/TCPALM Wochit